Taking on Soylent in the states clearly isn’t enough for Saturo. It’s barely a month since it was reported they’d secured a six-figure investment and they’re clearly putting it to good use; with a new product that challenges the more traditional brands head on in the powdered space.

I say ‘traditional’ even though the Complete Food market is barely five years old. We’ve had meal replacements for longer than that of course, but it was only with Soylent’s arrival in 2014 that these went beyond being part of a diet plan, were genuinely nutritionally complete, and actually able to replace any meal.

Joylent (now Jimmy Joy) and Huel were the first to launch and gain proper traction in Europe and much like Soylent these were both powder based. All of the brands that followed were too. I consider these to be the traditional brands; those that led the way in a niche section of the market made up of biohackers and experimenters and customers that were willing to chance their nutrition on a powdered drink.

The only problem with powders is that they were (and are) unlikely to hit the mainstream. There’s a lot of us that use them for sure, but they’re never going to be in supermarkets and corner shops and it was Soylent 2.0 in Ready To Drink format that first broke out of the internet and into American stores nationwide.

Soylent may have finally launched in the UK, but the Soylent-less vacuum of the last few years allowed a lot of European brands to flourish and find success. But still, it’s mostly powders.

The next generation in started in Europe with Mana, but more recently YFood and Saturo launched their Ready to Drinks to riotous success. Saturo in particular with its soy-based vegan range is ideally suited to mainstream appeal and I expect the big investment is going to pay off extremely well for the investors.

But launching a Saturo powder: Is that a smart move, or a step backwards? 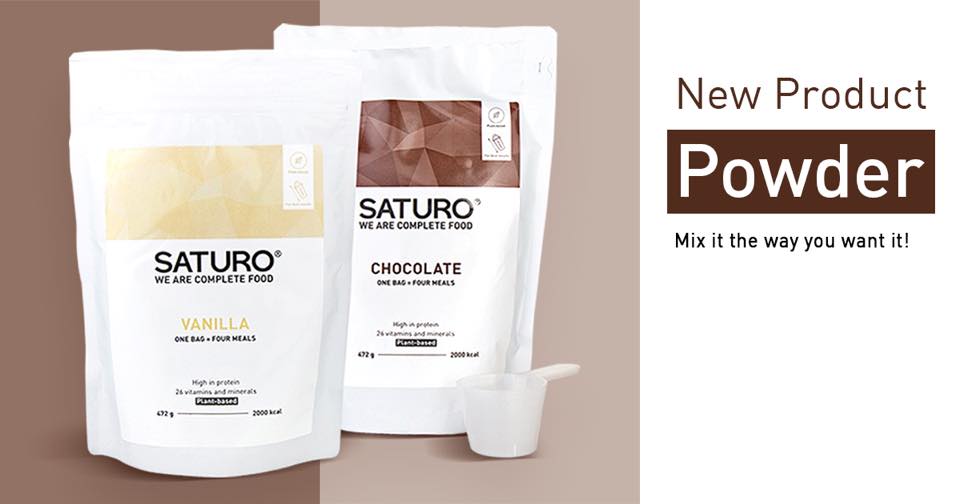 Moving into powder as the powder brands are moving towards RTDs seems, on the surface, to be an odd decision. So I reached out to Hannes Feistenauer (Saturo CEO) and heard back pretty quickly.

This is a part of our full-range strategy and allows us to target a different customer segment. In the end, we think that even though the powder market is more mature, our R&D team can still add value.

So it seems they aim to meet customers where they are and tempt them into being able mix and match between products. Something they’ll enjoy doing and certainly with the exception of France’s Feed, Saturo probably has the most extensive product range of all Complete Foods; spanning bars, drinks and powders across vegan and whey formulations.

The whey release is interesting in of itself. Up to now Saturo was a vegan brand and this is obviously a marked departure from that. Yet the move really demonstrates the team’s canny knack of not just listening to the market, but being clued up enough to anticipate its needs. The recent backlash to Jimmy Joy’s removal of whey clearly came after Saturo started working on their powder and shows that whey is strongly desired by many. Hannes doesn’t speak of that, but he does point directly at the recent Complete Food Survey as another indicator for a strong interest in whey (45% of respondents preferred whey as a protein source).

Saturo don’t always get it right of course, but they pivot quickly and when their move away from 500kcal bottles to 300kcal tetrapaks was met with disappointment they backtracked slightly, shifted gear and managed to turn the situation around into an expansive product line that meets the needs of different meal sizes and offers a lot of flexibility.

The only thing that remains is how this new powder directly compares to the pre-mixed Saturo. The macros differ slightly with an increase in carbohydrate content, less fat and marginally more protein; but it’s still a decent balance and whilst I initially suspected it was more to do with maintaining micro-nutrition in the new format than a conscious choice, Hannes was quick to correct me.

Like with flavour and texture, we did not strive for an exact copy of our drinks and took other category-specific factors into account.

Our powders offer a richer and thicker experience. We develop drinks and powders in different teams and provide them the freedom to optimize each independently and without constraints to provide the best experience.

That surprised me. They’re unlikely to work in isolation but having multiple teams working in parallel to deliver the product range, that’s a smart startup mentality and shows a keenness to experiment and grow. On the question of more flavours, it seems we’ll have to wait. I was hoping for a coffee powder that was on par with their bottles but that’s not going to happen soon.

Not at this moment. We have a product in the pipeline that is arguably way more exciting than coffee powder.

What is going to happen is US shipping. No word on when exactly but it’s nice to know to expect it. But that other product in the pipeline? Saturo has multiple RTD’s, a bar, new powders. I wonder what they’re working on?