Hol Food is a nutritionally complete meal replacement shake made in Canada by Hol Food. Shipping is available throughout Canada and the USA. Read on

Hol Food is a nutritionally complete powdered meal replacement shake made in Canada by Hol Food. Shipping is available throughout Canada and the USA.

When it comes to taste; Hol Food is available as chocolate, vanilla.

Hol Food is an all-in-one nutritional shake that contains all the nutrients, vitamins, and minerals required by your body. Giving you 100% of your daily nutritional requirements, it can be used to replace any or all meals throughout the day.

Hol Food can be used to replace all of your meals, but many people also use it as a healthy and convenient alternative to just one or a couple meals per day.

One pouch of Hol Food is designed to satisfy your nutritional requirements for a whole day. So, if you want to replace all 3 daily meals with Hol Food, you would mix 1/3 of the pouch with water and drink for each meal. While blending is our team’s preferred method, shaking up Hol Food like you would whey protein also works just fine. 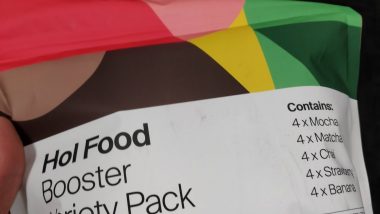 About a year ago Hol announced a new series of flavour boosts and fans went mildly wild. Then the pre-order went on, and on, and on. 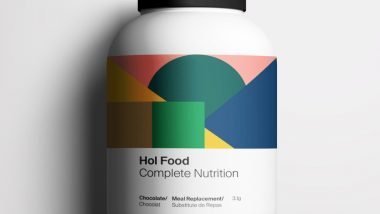 I don’t exactly live under a rock but if much has been said about this online then I’ve missed it completely. Hol Food, Canada’s much loved single flavour meal replacement is back?with some big changes to announce. To be fair they were never ‘gone’ but they’ve definitely been quiet for a while as they focused […] 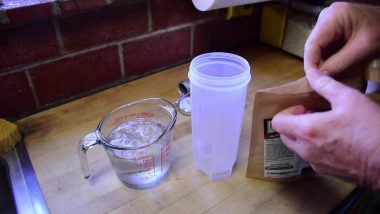 A review and tasting of Hol Food. At 49% calories from carbs it has more carbs than any other I’ve tried. The flavor is chocolate with only a little sweetener. Texture slightly sandy, with some grains settling to the bottom of your glass.

Spotted on reddit….Hol Food are running a 10% off sale through to July 4th. Hol Food are well regarded based on reviews so far, and discounts are always great to keep the hungry well fed 😉 Visit Hol Food here

Shipping: Placed the order late on Tuesday, lable was created Wed, was shipped and got my notification around 6AM Thurs. Went through Canada Post, origional estimate of Tuesday (Monday being Labor day). Arrived today be surprise, which was nice.

Packaging: Comes in a big plastic tub, which I like more than the small bags as they tend to not re-seal very well. Comes with a scoop, I found it by poking aorund with a chop stick then using a spoon to get it out.

Taste: Very good dark chocolate flavor up front, no strange after tastes at all. Very impressed here, I would describe it close to Ghirardelli dark chocolate brownie mix, but less sweet due to not having all the sugar. You don’t need to do anything to this to make it taste good, though it’d probaly be good if you blended in a banana or something, too. I’ve only tried the various Soylent flavors before this, but this really knocks them out of the park. I could see this one flavor getting old if you weren’t a big chocolate fan, but I am.

Prep: I used a 20 oz blender bottle, put some water in the bottom, addded two scoops, filled up with water and then shook.

Texture: Was not thick at all, but could use less water to change that. A bit of the oat flower did not disolve particularly well, but I didn’t mind it too much as it wasn’t like large chunks.

Longevity: Since I’ve seen this come up, I thought I’d include it. My batch I received on 9/2017 has an expiration date of 12/2017, so it should be good for about 3 months, which will be more than enough time for me to use it all, however I’ve gotten soylent probably 6+ months ago that has an expiration date of 2/2018. It could be the milk involved gives it a shorter shelf life, but I probbaly wouldn’t use this to hoard. It may also be fine for a awhile after that date since it’s a powder.

Hunger: Finished my first shake at approximately 10:30 AM. Was my first meal of the day (had been waiting since I saw the out for delivery notification). Was pretty hungry then, after finishing I felt good to go, not bloated or anything, but not hungry anymore. Started feeling a bit hungry agian around 1:30 PM, which is a good time frame given the amount of calories.

Nutrition: Seems the nutritional profile is pretty on point, though I’m not an expert. Way better nutritionally than I’d be eating normally.

Overall: A solid 8.5/10, I know they are working on the formula from posts I’ve seen from u/[fill in] to resolve the texture, but even if it doesn’t bother me smoother could be nice. This is definitely my favorite *lent I’ve had so far.

Definitely my favorite of all the products I’ve tried. Incredibly tasty and really filling (especially when mixed with milk, which also tastes amazing).

Oh, and did I mention that it’s by far the cheapest product I’ve found in Canada?

I generally like to take my Hol Food with me in a thermos and drink it slowly throughout the day. A couple scoops of powder mixed with water or milk will generally keep me full all the way through the day.

Tried the new batch that comes in the big tubs – which are great by the way. Mixes reasonably well, but still a bit gritty, and would be nice if it was thicker.

Directions call for 250mls water to 2 scoops powder (approx 500 kcals) but it’s still a little thin. Using less water obviously thickens it up, but I prefer a bit more volume to fill me up; however using more water means it’s really thin.

Main problem is the flavour – it’s like intense almost dark chocolate. It seems like it would be awesome, and it’s perfectly nice for one meal, but it gets really cloying by the end of the shake. Also, the flavour is so strong and intense that you can’t really add anything to it that would change the flavour significantly, so you end up with the same flavour for every meal, and when that’s 2-3 a day, it gets boring really quickly.

I cancelled my subscription after receiving the first tub (I’d had some pouches from the previous batch, but the less said about that the better), but would gladly consider Hol again if they start producing a more neutral flavour like Vanilla, which you can then add your own flavourings to for variety.

I’ve really been enjoying Hol Food – of all the nutritionally complete foods I’ve tried so far, it is by far the best tasting option, and it comes at a good value dollar-wise. I personally like that they have stayed away from artificial sweeteners (allergic to sucralose) and soy products as well. I feel much better after a Hol Food meal as compared with a normal breakfast or lunch, and at this point I usually have Hol Food 2-3x per day. Can’t recommend it enough!

One great thing about HolFood is the delicious chocolate flavor, and also, refrigeration is not needed after mixing, which is a big plus if you like to leave it prepared, take it with you, and consume it at a later time, without affecting the texture nor taste. The texture is a bit grainy, but is good nonetheless .

I use Hol Food 1-2 times daily and have to say that it’s the best powdered nutritionally complete food I’ve tried in terms of taste and overall experience.

I love the chocolate flavour, the texture is good, and the nutritionally profile is on point.