Flavour:
Serving fills you up:
Value for money:
Overall

Drinking Meal is a ready to drink meal replacement shake made in Germany by YFood Labs GmbH. Shipping is available throughout Europe. Read on

Drinking Meal is a nutritionally complete ready to drink meal replacement shake made in Germany by YFood Labs GmbH. Shipping is available throughout Europe.

When it comes to taste; Drinking Meal is available as chocolate, Coffee, vanilla.

YFood is nutrition for the new generation, which is more mobile than ever before and has understood the importance of a healthy diet at affordable terms.

YFood satisfies your hunger without being hard on the stomach and gives you constant energy over the day by supplying you with over 33g Proteins, 27 Vitamins & Minerals, essential Omega 3 fatty acids and important fiber.

A complete meal from a bottle?! We know this might sound weird at first and you might even think we’re trying to sell you some chemical poison mix here. But sorry pal, you’re dead wrong.

YFood consists of the best nature has in stock and is the result of top-tier German scientists’ research & development efforts in combination with high-tech manufacturing processes. Giving it a shelf-life of 12months without the need of refrigeration or the usage of preservatives.

Enough with the facts though, how does it taste Well, we don’t want to brag, but that’s the best part about it: It tastes just great. Our Original, shows a pleasant natural vanilla flavour combined with a subtle sweet note, you’ll never get tired of. 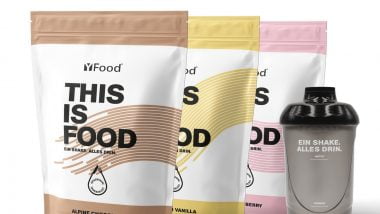 YFood Powder – what do we know? 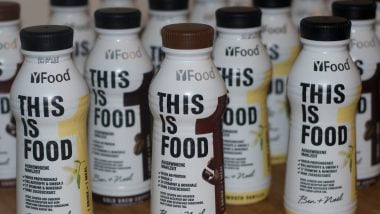 When I first found out about YFood my interest was instantly piqued. Not only was it the third European Complete Food I’d heard of that had opted for the Ready to Drink format, but it eschewed the usual reliance on soy in favour of… milk, and that’s relatively usual for Complete Foods.

This review is for the overall available flavors; coffee flavor gets 11/10 points from me.

The texture is very smooth; thickness is erring on the watery side, but it’s alright.
The sweetness though… it’s over the top and it’s the sole reason I dislike it.

Unlike other rtd’s this is an a proper milkshake. Delicious, easy to drink, doesn’t really fill me up but definitely keeps hunger at bay. I really liked this.

(by far!) The best tasting meal replacer out there. First ordered their taster pack and have to say that all of their flavours are simply delivious. Got me a monthly subscription now of coffee and chocolate as I like those best. Regularly use them while communiting to the office in the morning.

The flavour is great, but way too sweet to consume it regularly as a food replacement.
The texture is perfectly smooth. Being used to vegan products I can’t stand the very strong milk aftertaste, I immediately have to brush my teeth. Serving size works well.

I am a big fan of Meal Replacement Drinks and I finally found my favorite one! What makes it the best, is the yummy taste which outperforms all other drinks I tried so far. I also like the composition of the ingredients and as my boyfriend is allergic to soy, we say yes to this soy free Meal Replacement Drink! Five Stars!

This is the first RTD product that I really enjoy drinking on a regular basis. It tastes very much like a vanilla milkshake, with some very nice texture. I drink one bottle a day for a few weeks now and still can’t get enough of that pleasant flavor!

Nutritionally, YFood seems to be very balanced, with a great distribution of macro nutrients. Especially the high protein content catches the eye.

It also managed to be free of lactose, soy and gluten and I don’t have any problem with the digestion.

The drink contains 500 calories and fills me up for more than 4 hours.

The price of 2.99 great value for your money (but there are cheaper products when you buy a powder version)

I really really like this drink. It was quite a surprise to me as I didn’t hear a lot about YFood before, but it tasted A LOT better than anything I have tried in this field before. This is probably due to its milk base which gives it a much smoother texture and fuller taste than any vegan based product out there. The milk is lactose-free though, so even for me (I’m allergic to lactose) it was absolutely no problem to drink.
The nutritional profile also appeals to me, high protein & good amino acid profile – and a lot of fiber (6.0g/Bottle) – which is personally important to me.
The last thing I should mention was the super quick delivery – I received it straight on the next day which I probably never experienced with any other shake before. For most of the other European meal replacers, it took them 1-2 weeks which is just annoying. I have to say though that I live in Germany and that YFood is a Germany based company which is probably a reason for the quick delivery within Germany.

To sum it up: great product, great experience!

I have been eating complete foods for over a year and a half now. I like to try different options which is why I also wanted to give Yfood a fair shot.

My favorite product so far has been Saturo and on weekdays I consume 2 bottles a day and on some days up to 3 bottles. I have an active Saturo subscription going on but I wanted to try alternatives and get a bit of extra stock as my subscription barely lasts me the month.

I was a bit hesitant trying something milk based as one of my standards for a complete food was always to be fully vegan product. I am not vegan myself though. However I never drink milk so I was very unsure of what to expect flavor wise.

Shipping
I ordered the product on the 12th of november. The product arrived just after a week on the 20th of november. This is quite slow but it seems to be the standard delivery time from Germany to Finland. Saturo also takes a similar time.

One minus comes from not receiving any shipping update from Yfood. As of now the product is still under Your shipment is confirmed status.

The parcel was not delivered to home but rather left at Finnish postal office which is quite close to me. Not a big problem as the order was small. For bigger orders this is something that is a deal breaker for me though.

Packaging
Nice. Same bottles as Saturo so nothing new.

Taste
I had read previous reviews of the taste and they seemed to be only good. I was expecting something quite neutral as the flavor is called original. However to me it tasted very heavily of vanilla. Also the drink was overly sweet and seemed very artificial to me.

Because of the taste I ended up chugging the drink down as I really disliked it.

Texture
Really smooth and no bits in the drink. Easy to drink as for the texture. I would compare it to Mana drink or Saturo original. My favorite drink texture wise is Saturo chocolate as it’s a bit thicker than their coffee or neutral.

Nutrition
Not an expert on this area. I do like the fact that it has enough fiber and the micro and macro nutrients seem to be in good shape. Tad heavy on the protein for my preference but it’s not a real issue.

I would prefer more vitamin D though.

Satiety
I started drinking Yfood after I woke up at about 7:15. I normally consume a bottle of Saturo in half an hour and drink half a liter of water before Saturo. However with Yfood I took longer to drink as I found it hard to go for another sip because of the taste. I think I ended up drinking it around 8:30. I was very hungry by 11:30. Quite normal for a 500 calorie meal but normally with Saturo I have my lunch slightly later.

After drinking Yfood I got a slight headache but that might be caused by other events.

Conclusion
Currently I would not order Yfood again. I am looking forward to trying their new flavours though when they get to market. Hopefully there will some kind of a taster option so I don’t have to order a 12 pack.

Also I wish to get more vegan options on the market. Hopefully from Yfood as well.

I will be giving my wife a bottle for tomorrow and lets see if she ends up liking it.

The taste made it unbearable for me so the score is also very low. However my wife really liked the drink which means it will not go to waste :).

Finally, a ready to drink meal without soy!

Also, 33.5g protein per bottle is absolutely great for someone who does a lot of sport and is much higher than other products.

Flavour/Texture/Aftertaste: I think it’s more a vanilla taste than really an Original, but I really love it. You can easily tell they added a bit of lactose-free milk to the mix. The texture is just much smoother and the taste much fuller than on a pure water basis. Also, not using any soy or pea protein, you don’t have this strong (after)taste. All in all, I think the taste is really what makes this product stand out from the masses. Both flavor and aftertaste area really well done (esp. if you like it slightly sweet)!

Serving Fills you up: About 4 hours+, pretty decent.

Value for money: Ok’ish. I order it as a subscription model for 2.69?/bottle, that’s a bit more than the powder I use, but I guess it’s fair, considering it’s already pre-mixed and hence much more portable and hassle-free.

I probably tried all ready-to-drink meal replacements on the European market and have to say that this is by far the best tasting ‘original’ version. I even liked it better than Soylent (at least the previous RTD version, haven’t tried their reworked formula yet). It gave me a pleasant filling for about 3-4h without any down feeling after drinking. Since about 3 weeks I’m drinking Yfood on a regular basis as breakfast substitute, works just fine for me.

Would prefer an vegan alternative in tetrapak like mana, the vanilla taste is good but I expected a neutral flauvor, so was a bit suprised when I drank the first bottle.